Skip to content
You are here
Home > Cricket > Stuart Broad, James Anderson are two of England’s best of all time: Joe Root 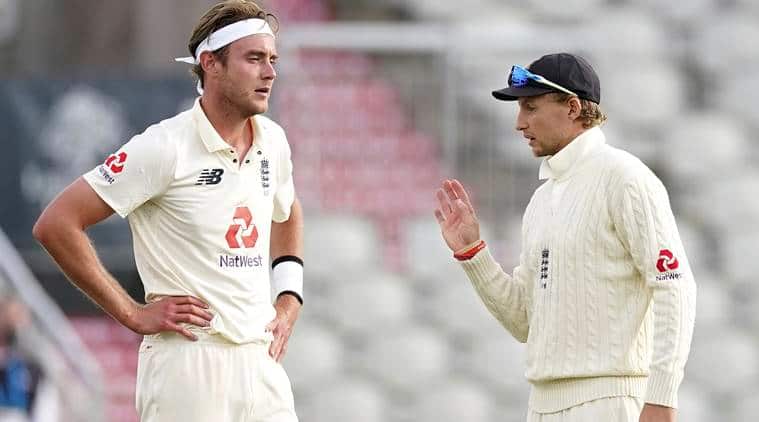 Stuart Broad grabbed his 500th test wicket to set England on their way to a resounding 269 run win over West Indies in the third and final test at Old Trafford on Tuesday.

Broad joined an elite club, finishing with match figures of 10-67, as the West Indies were bowled out for 129 runs in between several rain delays in Manchester.

This was the first test series win since the COVID-19 pandemic. England’s next assignment is a three-match test series against Pakistan, starting next week.

After the game, Broad was adjudged as the player of the match. Reflecting on his performance, the 33-year-old said,” When you get milestones, you want them to lead to match wins and series wins. So it feels very special today.”

“Haven’t ever really set any targets on that front (on how many wickets he would end up with). Have learnt a huge amount through my career. Have done some technical work that makes me feel in a great rhythm right now. The competition keeps everyone performing. We’ve got a real battery of fast bowlers at the minute. Really strong bowling attack in these conditions.”

Blown away by the kind support. Thank you so much. To take # 500 in a Test match win leading to a series win feels very special. I love cricket 🏏 😁 https://t.co/V2xpkPJ1Go

Skipper Joe Root was all praise for his seamer and his team which bounced back after the defeat in Southampton.

“The last two weeks have been excellent. We set out a game plan throughout the two games and we executed it pretty well in both departments. In the first game, with the first innings runs and in this game with the ball, we were outstanding. It’s a great step forward for us as a batting group. You look at the talent among those guys, you feel they can exploit a lot of different surfaces around the world.”

Absolutely made up for @stuartbroad8! Delighted to be on the field and share this moment with one of my best mates ❤️ @ Emirates Old Trafford https://t.co/xCF8rHEvDs

“For him (Broad) to come back and make the impact in these two games is a testament to how good a player he has been. Couldn’t be happier for him, especially the way he finished off today. Runs in the first innings, 500 wickets, it’s a phenomenal achievement. The sort of player he is, he wants to be a part of the big occasion.”

“More than anything he grabs the big moments in series. Wants to take the ball in difficult situations. Ashes series, South Africa in Johannesburg, this series, so many more. Very good with the other…

‘He has the ability of Virender Sehwag’: Jaffer impressed with young India

‘Asking Srinath to bowl another over would’ve been embarrassing’: Anil Kumble

Pakistan team faced with legal threat of equipment being seized